It’s been a rather magical start to the 2016 season for the Chicago Cubs, with many eerie historical parallels that I’ve mentioned in previous posts. Tonight, another notch in the history gunbelt was created, as the Cubs now have the best run differential since the 1905 New York Giants. 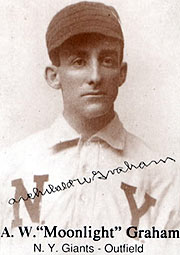 Why is this particularly significant? Well, one of the players on that Giants team was none other than Archibald “Moonight” Graham, of Field of Dreams fame. In the movie, it was stated Graham played for the Giants in 1922, when in reality, he played in one game, minus an at-bat, in 1905.

History in the making continues…

My Tweets
Join 503 other followers