One of the overarching and never underestimated compliments of most early deadball-era pitchers (to me anyway), is that they were indestructible. That is, their arms were. A quick glance at the stats of late 19th/early 20th century legends like Cy Young, Pud Galvin, Old Hoss Radbourn and Cannonball Crane among others reveal some hysterical numbers in terms of innings pitched, games started, and complete games.

One of these dapper gents however, achieved a completely asinine feat that the rest did not: He threw 185 consecutive complete games.

Jack Taylor began his pro career in 1897 with the Milwaukee Brewers of the old Western League, a team managed by the great future Hall of Famer, Connie Mack. He broke into the bigs in 1898 after the Chicago Orphans (Cubs) purchased his contract later in the ’98 season where he remained until 1903. On June 20, 1901, Taylor took the loss in a complete-game performance against the Beaneaters (later the Braves) at the South End Grounds in Boston. This game would be the catalyst for nearly five years’ worth of completing every game he started.

Nicknamed “Brakeman Jack” for his occupation in the offseason, Taylor was a non-flashy, but tough-as-nails righty from Straitsville, Ohio.  His breakout season came in 1902 where he compiled a 23-11 mark with a sizzling 1.29 ERA, along with 34 complete games in 34 starts and was the league leader in ERA, WHIP (0.953) and shutouts (8.) After the regular season ended, the Cubs and crosstown rival White Sox engaged in an exhibition “City Series”, something that would become a Chicago tradition for many years. In this particular series, Taylor was accused of throwing a game to the Sox. Though nothing was ever proven, he was nonetheless traded during the winter of 1903 to the St. Louis Cardinals. The Brakeman was dealt along with Larry McLean for Jack O’Neill and a young, unproven and undervalued pitcher named Mordecai Brown. At the time, it seemed the Cardinals’ got the better half of the deal, but not long afterward that table turned as “Three Finger” Brown would go on to a Hall of Fame career with the Cubs and locked his own valued place in baseball lore. 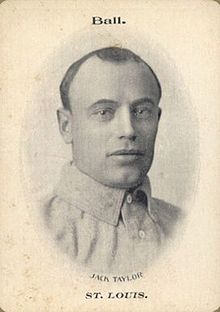 Meanwhile, Brakeman Jack’s complete game streak continued with the Cardinals, sealing up 39 of them to lead the league, along with 20 victories in 1904. Amid repeated accusations of throwing games, none of which were proven, Taylor became a fairly hot commodity. In 1906 he was traded back to the Cubs, and the timing couldn’t have been better, as there he joined an outstanding, now-famous pitching staff led by Brown, along with Orval Overall, Carl Lundgren, Jack Pfiester, and Ed Reulbach. The Brakeman added in his own 12-3 mark on the season, but ended his complete game streak at 185, after “only” completing 15 of 16 games that year. His ERA was a stellar 1.83 and a factor in the Cubs’ team ERA, which ended with an unheard of mark of 1.76 for the season. The Cubs would reach the World Series, but ironically fall to the crosstown White Sox, where the famed “Hitless Wonders” would do enough damage to the elite Cubs pitching staff to take the title. A year later, Taylor helped the northsiders back to the World Series, this time emerging as world champs after defeating the Detroit Tigers. 1907 would be Taylor’s final big league season, though he would bounce around in the minor leagues for several more years before finally hanging up his cleats in 1913. He returned to Ohio, worked as a miner, and died there in 1938.

For his career, Brakeman Jack Taylor would amass a 152-139 record, to go along with a career ERA of 2.65. Certainly nothing to scoff at there, but when you factor in his 2,626 innings and 20 shutouts, it’s hard not to consider Taylor among the elite, if certainly overlooked hurlers of the early deadball-era. The most impressive mark of course, being his MLB-record 185 consecutive complete games. That is absolutely crazy to conceive, in any era of baseball.

They sure don’t make ’em like that anymore, folks.